History and Demographics of Smithtown 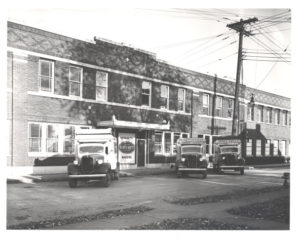 FoodChain is located in the northwestern corner of the urban core of Lexington, KY. The ½ mile radius surrounding FoodChain is comprised of very different, vibrant communities with rich histories at the crossroads of which sits our site. The main access point is West 6th Street, to the east of our building, comprised of stately antebellum homes. However, these homes, and their mostly wealthy inhabitants, represent the smallest portion of the population in this community.

Instead, the most significant and historically noteworthy portion of our community is to our south. Known as Smithtown, it is one of the oldest African American communities in Lexington. It was settled after the Civil War, in the late 1860s and 1870s, when many freed slaves and free African-Americans were migrating to cities. At this time, land developers bought land on the outskirts of Lexington’s city center, subdivided it into small lots, and sold them to newly freed African Americans. Smithtown has survived much adversity in its almost 150 years, serving as a refuge from discrimination.

Over the years, industrial, institutional and retail establishments moved in to create a genuine mixed-use neighborhood. The largest of these was a bakery, eventually occupying a 90,000 square foot building and producing bread for much of the region. The bread factory provided jobs to many African Americans residing in Smithtown; but it also employed people from elsewhere, who moved to the area and established their own neighborhood of single-family bungalows to our north. Many residents who live here today had parents or grandparents who worked in the bakery.

After Congress authorized the Section 8 Program in 1974, another, although much more transient, community arrived. The construction of Coolavin Apartments, located to our west, allowed for 104 low-income individuals and families to move to the area and ideally find work at the factory. However, as with many Section 8 housing units, the area has struggled with a transient population. Lacking a neighborhood association, residents have little connection with the larger  community and the buildings have fallen into disrepair, struggle with an absentee landlord, and are often marred with crime. For years, the voices of these residents have gone unheard.

In 1995, the factory was sold to a records storage company when a significant majority of employees lost their jobs. The building served in that capacity until 2008, after which it stood vacant until 2011. It was at this point that the soon-to-be owners of West Sixth Brewing bought the entire building, now called the “Bread Box,” and began leasing out unused space to community-oriented businesses and organizations including FoodChain, The Plantory (an incubation hub for nonprofits), The Bread Box Studio Artists, and more.

The entirety of the neighborhood surrounding FoodChain is located within the 40508 zip code. Although these communities only represent approximately 1/6 of this zip code area, the demographics of the 40508 area are strongly reflective of the demographics of these communities. According to the US Census 2010-2014 American Community Survey 5-Year Estimates, in 2014 25,868 people live in the 40508 zip code. Of this, 49.8% are males, 50.2% are females, 62.6% are white, 27.9% are black, and 9.5% are other/mixed races. In this area, 52.7% of the population is living below the poverty level. 50.7% of the population have less than a high school graduate education level and 37.2% have a high school diploma or equivalent. Lastly, 67% of the entire population within the 40508 zip code in unemployed.

It is clear that one of the biggest challenges for this neighborhood is poverty and unemployment. Over 20 years after the departure of the primary employer, the bread factory, economic strains are still heavily felt by the residents. Although some business and retail have moved into the area, job prospects for the residents are lacking. Most of the employment opportunities are awarded to outsiders with little to no connection to this community. In addition to unemployment, food inaccessibility is also a major concern for this community. This area is a USDA designated food desert, without ready access to fresh, healthy, and affordable food. Instead, this neighborhood has access to fast food restaurants and convenience stores that offer few, if any, healthy food options. Food deserts typically show higher frequencies of diet-related diseases like diabetes and heart disease.

Although these issues are abundantly apparent to those residing in this area, there is no collective effort to address the problems on a scale that would bring effective change. Because the community is comprised of disparate groups, there is little social cohesion between the diverse groups of residents living in such close proximity to each other.

However, there are many assets within this neighborhood that could promote larger community development if residents were given the relevant tools and opportunities. The most notable asset being the rich history and longevity of the Smithtown community. For nearly 200 years, Smithtown residents have been deeply dedicated to this area and the history they have forged along the way. The newer residential sections of our neighborhood can greatly benefit from working alongside the deep rooted families of Smithtown’s historic homes.

The primary asset to the area is its rich diversity of race, culture, experience, and education, which can serve as a fundamental advantage for community revitalization and development. Being situated at the crossroads of so many diverse communities enables FoodChain the possibility to become the conduit of community between these disparate groups. If allowed the opportunity to integrate among each other, these neighbors could built a vibrant and resilient community where these diverse peoples not only coexist but co-evolve in a deeply meaningful way.

There are many avenues in which this vision of community pride and solidarity can take form. The area is fortunate to be geographically concentrated and extremely walkable. Furthermore, in addition to homes, the neighborhood continues to be mixed use, with restaurants, businesses, churches, and many community-minded organizations and activists in its core. These establishments allow for key partnerships in bringing residents together for meaningful neighborhood revitalization. There is interest across all of these disciplines to increase the quality of life and social engagement of the citizens who built this neighborhood.

In regards to the Neighborhood Green Grocery that FoodChain hopes to establish, the neighborhood has shown high aspirations towards its completion. Recently, from January 2014 – October 2015, qualitative research was completed by Tweens Nutrition and Fitness Coalition within this neighborhood to evaluate the perspectives of residents in relation to a new neighborhood grocery store. Respondents of the Smithtown Kitchen Store Report were recruited through flyers, email, neighborhood connections, door-to-door introductions, and community engagement activities.

Findings show residents are interested in a place to see neighbors: “If you have tables and chairs we’ll never stay at home! We’ll stay out there on that thing, we’ll eat, watch people go by. You let your kids go by and play. You sit there and eat. You’ll have a lovely time!” (Courtney, Porter 4); and a safe place for their kids to get a snack and work on homework after school: “Outside table and chairs would be nice. Kids who walk home from school and they want to eat at the table outside. If they walk past and there is wifi they will sit down at the tables. I know that I would” (Courtney, Porter 5). Many residents are interested in affordable whole, fresh food they can cook at home: “Chopped vegetables would cost too much and not be as fresh. I’d rather do it myself” (Courtney, Porter 15); a place to learn cooking skills from others in their community, “Make some of the classes specialized enough that people who are already comfortable cooking can get new info—like ethnic food. It would have to be something beyond the basics.” (Courtney, Porter 16), as well as jobs for residents and young adults.

It is clear that there is a strong demand for a grocery that can provide healthy, fresh, affordable food to this neighborhood, where there are no other options. It is even more inspiring that many residents want a community-oriented neighborhood grocery, one that allows a space for cultural expression and social engagement; a safe place for children to integrate with their community; opportunities for job training and employment; a place for events and educational classes hosted by the community for the community; and a venue to celebrate this area’s uniqueness and culture.